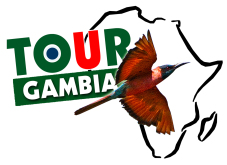 Modou Barry was born and bred in The Gambia into a mixed family parentage - his late father was Fula and his mother is Jahanki. Modou Barry’s own family, his mother and six younger brothers and sisters, settled in the small Gambian community of Tunjina village at Kuloro.

As the head of the extended family and main breadwinner, Modou Barry was faced with a major challenge. Like many youths in his village, he fell short of educational targets because of a lack of finance, an all too common problem in The Gambia.

However, he never relented in his aspirations and ambitions, and turned to what he truly loved in life – an appreciation of nature and society. Within a short period of time, Modou Barry became a recognised and licensed tour guide, who for the past five years has successfully guided tourists around the length and breadth of the country, always taking his customers’ needs into account and ever ready with a big smile.

He is also a member of Gambia Birdwatching Organisation and Farasutu Bird Club, and plays a vital role as a social worker in his own and the wider community.

Modou Barry, now aged 27, comments: “My aim in life is to help both myself and my people. Tourism is so important to The Gambia in the ongoing battle to eradicate poverty, raise the living standards of the people and contribute to economic growth.

“By booking one of our tours, you will also be contributing to the well-being of the people you meet and playing a significant role in the actual conservation of the communities in which they live.

“You are actively putting something back. Both I and they cannot thank you enough.”

NB: We also organise Bird Watching itineraries in both The Gambia and Senegal. 1/2 Day or Full day birding in different habitat - eg WET LAND, WOODLAND, FOREST. Plus Bird Watching Itineraries one week to two weeks. GET IN TOUCH FOR MORE INFORMATION

LOOKING FOR SOMEWHERE TO STAY

Seafront Residences & Hotel, right on the famous Bijilo Beach. Just 20 mins from the airport and 10 mins to the Senegemabia Strip  – a combination of modern luxury with the richness of traditional Gambian culture. 20 individual custom-decorated suites.Living spaces that are truly unique. www.seafront.gm

Lemon Creek Hotel Resort in Gambia is situated right on the beach, approximately 2 km. southwest of Senegambia Area (Kololi). The area of the resort is around 40.000 m2 and built in a Spanish Colonial style. All buildings on site are not more than two storey.The constructions and architecture are made with respect to the nature of the landsite and the garden hosts an extensive birdlife. www.lemoncreek.net

Your wedding ceremony in The Gambia

Simple, yet diverse with our friends at The Lemon Creek Hotel:

MAKE IT A DAY TO REMEMBER FOR ALWAYS

Our new tour vehicles - plenty of space and well equipped to handle every type of terrain;

on-road or off. Below is our luxury taxi.

BY THE GAMBIA TOURIST BOARD

Above: A picture postcard view